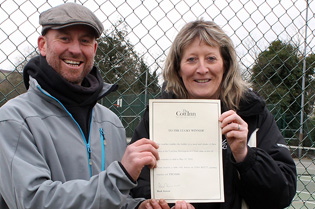 Along with thousands of people across this country last weekend, whose sports’ efforts have helped raise a staggering £56,984,007 already, enthusiastic adults and juniors of the Totnes Tennis Club took to the courts in Borough Park on Saturday to raise their own £400 in a fun short tennis tournament.

As John Callaway, organiser of the event commented: “We are delighted with how much we raised and everyone had a lot of fun taking part. Playing short tennis, which uses soft balls, small rackets and a smaller court, we were able to include people of all skills and ages in the game and it was a real success. And the money we have raised will help people living unimaginably tough lives across the UK and the world’s poorest communities,” he said.

“Another reason we really wanted to get involved with Sport Relief, is that what this amazing charity stands for, is exactly what we want to do for children, and their parents, in Totnes: encouraging everyone, of any sporting standard, to play tennis, enjoy being outside and improving their health and sense of well-being,” John continued.

Thanks to the generosity of many local businesses, there were some fantastic prizes for the tournament winners and fund-raising raffle. The adult tennis winners received generous vouchers for a meal at Dartington’s The Cott Inn, while the children won Roly Poly fudge and a rucksack.

The prizes were kindly donated by: