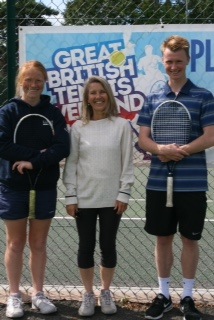 Siblings Zac and Teya Sheppard rounded off a successful summer of tennis with an array of victories in the County Closed Junior Championships held at the South Devon Tennis Centre, Ivybridge last week.

Younger sister Teya won the Under 14 singles title and then went on to partner Linnea Kogel to claim victory in the Under 14 doubles event. In a busy week of tennis Teya stepped up an age group reaching the semi-final of the Under 16 competition.
Brother Zac, playing impressively alongside regular partner Buzz Avis took the Under 18 boys doubles title.

Brother and sister Zac and Teya then teamed up on a long finals day to eventually become runners-up in the Under 18 mixed event.
Zac and Teya’s impressive showing under the watchful eye of long term coach Tonia Gooderham ensured that Totnes Tennis Club secured more County Closed titles than any other Devon club outside of Exeter. Hopefully this will serve to inspire other juniors who might be motivated to develop their game to county standard on the local Totnes courts. Find out further details on the Autumn Coaching programme.

Totnesian brother and sister Zaccariah, age 17, and Teya Sheppard, age 13, both club members, continue to have great success on the junior tennis circuit.
Totnes Tennis Club members Zac and Teya, under the guidance of their long-term LTA Coach Tonia Gooderham, who has coached the pair since they were 5, continue to achieve an impressive array of honours throughout the region.