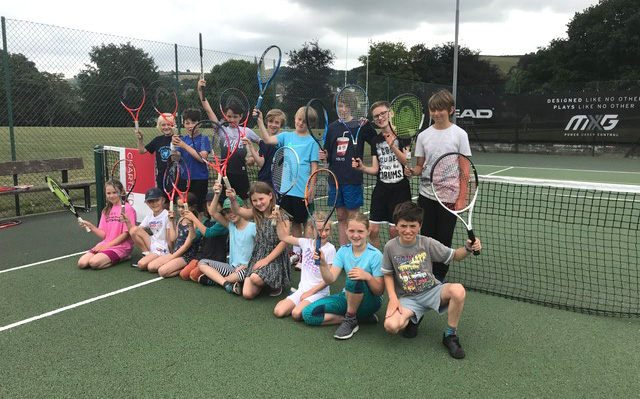 Following the great success of our recent wooden racket and white dress tournament Totnes Tennis Club turned its focus towards the newly established junior section. With over 85 juniors regularly participating in tennis through its range of coaching programmes and the cub policy of parent and child court access there is genuine demand for competitive matchplay amongst the younger age groups.

Experienced club coach Tonia Gooderham with the help of former Devon County Junior Zac Sheppard recently graduated from York University and his sister Teya set up three junior tournaments running concurrently.
The Red Ball tournament is designed for the youngest juniors and played with a slower ball allowing for longer rallies. The Intermediate Orange Ball tournament is for players with a little more experience whilst the Green Ball tournament is for the most advanced beginners. 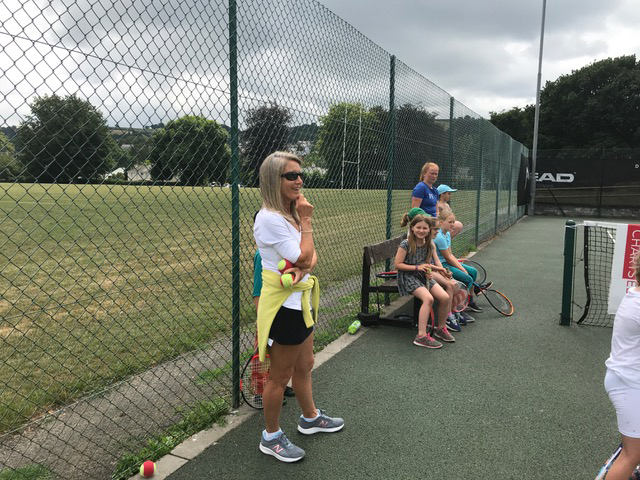 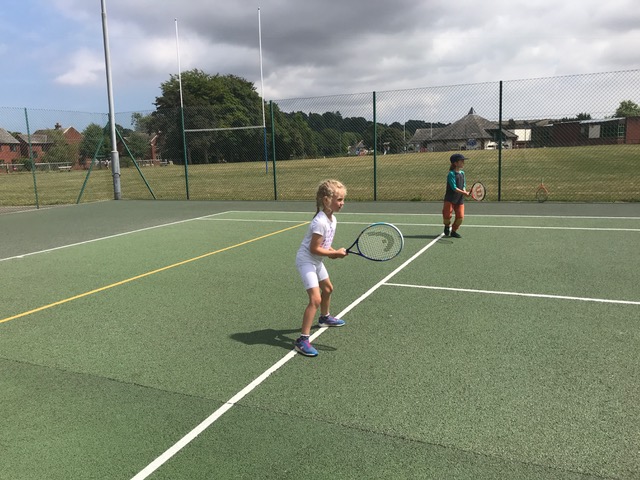 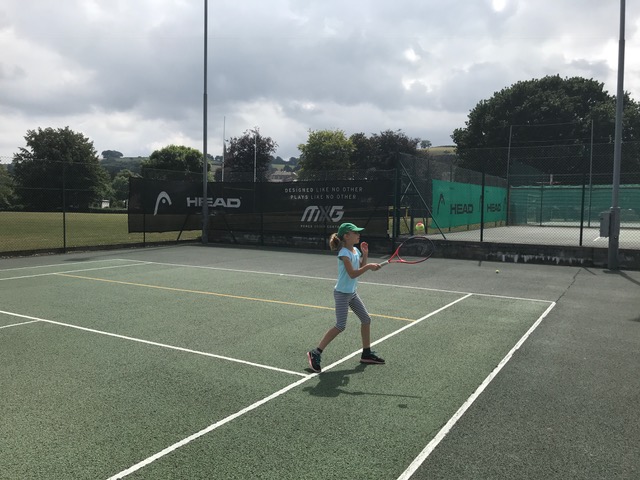 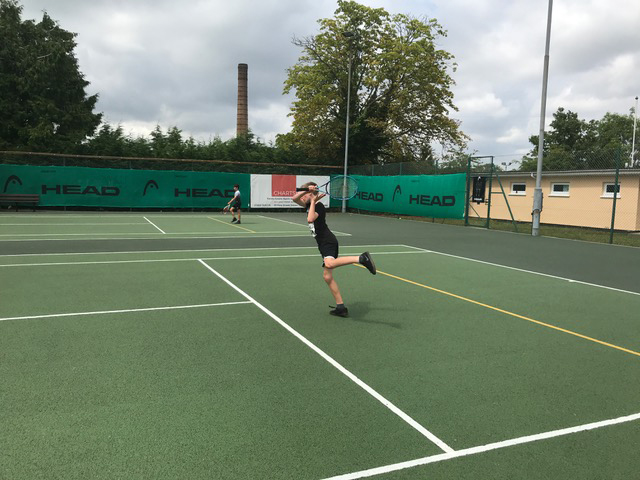 Putting into practice what they have learned under the watchful eye of club coach Tonia Gooderham. She commented:

“All three tournaments demonstrated a fine balance between competitive spirit and spontaneous fun. All the juniors were challenged to meet the demands of matchplay tennis in their appropriate groups and it was fantastic to see them grow in confidence as the afternoon progressed”

Many parents observed the high levels of sportsmanship on court whatever the scoreline and all players were quick to acknowledge the skills of opponents and keen to shake hands at the end of their respective matches. Adult club players expressed their appreciation of the technical competence of the Juniors wishing they had such coaching opportunities all those years ago!

Perhaps it was the array of prizes on offer that inspired the kids. Paul Hailey and Head UK generously providing prizes for the winners but also goodies in categories such as fastest serve, best rally, technical excellence, and player who had run the furthest!

“ It is fantastic that we have established such a strong junior section. It continues to grow in strength and this was a great opportunity to see the progress that has been made through the junior coaching programme. It is so uplifting to see so many youngsters on court ensuring a healthy future for tennis in Totnes”

Apart from the tournament featuring short tennis in March, the TTC’s only tournament of the year came close to the end of it. But this solitary competition was perhaps the best in recent memory. It showed that you don’t always need drums, trumpets and barbeques to celebrate tennis, even though the drifting whiff of a burger can give you a lift if you’ve just served yet another double fault.

And this late tournament was also more ambitious than the ones before. But organizer and Vice-Chair Keith Reay has never been known to shun the Grand Plan, which he laid out in impeccable sheets on a table in front of the club-house where we saw that all three doubles categories were simultaneously scheduled. He didn’t want the usual mixed-only event, or just women and blokes. He wanted the lot of them out there all swinging at once, which is a sort of very Keithy thing.

It was also ambitious because of the amount of members required. It was risky. Members are funny. Sometimes they unexpectedly congest the courts when it’s chilly and drizzly, or hardly come at all when it’s bright and bone-dry. But they came, almost all who signed for it and some who didn’t. So the doors closed on a full house.

And fortunately our Vice-Chair had evidently instructed Heavenly Weather Resources, for the sun which rose over Borough Park on the 6th hung gleaming like a medallion over the courts all day. No rain, no wind; just sunshine and tennis, and an easy buoyant atmosphere that made you glad that here you were again on the baseline, with the station tannoys echoing through the trees with the sad familiar news that the train to Penzance was approximately 43 minutes late and the one from Plymouth was probably not coming at all. And maybe many of us that day had a renewed sense of having an attachment to the Club, of actually belonging to it in the way one should, and that it was our club and not that rather icy place on holiday which almost stipulates the colour of your underwear. Maybe you know you’re in the right place when you look up and see the pointed high shoulders of St Mary’s tower standing over the town, and the stone barrel of the Castle with those funny ragged battlements which Francis used to fashion the Club logo from.

Whilst Membership Secretary Jackie Clayton informed new member Alison about the scented pleasures of the club-house rota, Graham ‘Jackpot’ Hayman in his brown and lovely legs theatrically touted tickets for the raffle, and money seemed to more quickly change hands when it was heard that Mark Annear’s abundant generosity might lead to a fifty-quid blow-out in the Cott. And then there was sudden silence as Sergeant Joss Woolford began drilling the tournament’s rules and regulations into an obedient assembly of players: seven games a match, sudden-death at deuce, choice of receiver. . . And don’t let me see any one of you holding his racquet-head down or you’ll be cleaning out the latrines.

With the charred husks of yesterday’s fireworks scattered defunct over the playing-fields of the South Hams, it didn’t seem likely that anything combustible remained to be ignited. Yet what happened beat any bonfire and squibs. It was alight from the outset. By one of those strange random combinations that you get in tennis, there wasn’t a team which couldn’t put up some kind of fight and win games. Every couple seemed to pass through the court doors with optimistic purpose, the sense that yes, we can reach further than last time, even outwit Don at the net just this once. But probably only just this once.

The look of keenness and resolve amongst the players was no surprise, for we all know that playing a game is a serious business. But perhaps one of the reasons for this seriousness goes unrecognized when the playing of sports is considered: it is because it is a sane pursuit. When things seem fragile and times uncertain games impose a definite structure that everyone affirms and obeys, for games are made by rules and no game can exist without them. Even tyrants can’t make an opening move in chess by shoving the queen into play, nor can a point in our own game continue after a double bounce. When other things appear to become arbitrary, games provide an abiding pattern unaffected by events beyond the white lines of the court. Some of us may know we’ll never be much good at the game we play. But good enough. Good enough to go down among others all doing the same thing and come away feeling we weren’t out of place. A loss there, a win there, or a tough tight draw that upsets no one. A good close game sometimes feels like rebalancing a broken wheel.

With the sun still staring hard at the clubhouse, the games came to a close and the points were counted. And though the Tournament was open to so many avid potential usurpers, those who came through to the final handshakes were those who had risen before: Brenda Sleeman and Sarah Huline-Dickens for the Women’s, Sara Widdicombe and Peter Daly for the Mixed, David Hamilton and Jos Woolford for the Men’s. And in the raffle it was Social Secretary John Callaway who ran off grinning with the Bonanza Ticket at The Cott. Well done, John. Vulnerability to bribes during the pursuit of your occupational connection with that public house is now under investigation.

It seems that this tournament will be the Club’s last before it shrugs off its shackles and passes into independence. It will mean that the Club will have to change some of its clothes, yet it won’t therefore be less familiar, less recognizable. Indeed, by throwing off constraints it’s likely that it will become even more like itself. And as some of its more unconventional but characteristic features become more visible in its newly liberated dress, it’s also likely that we’ll all come to think that the old clothes are best kept locked in the wardrobe. 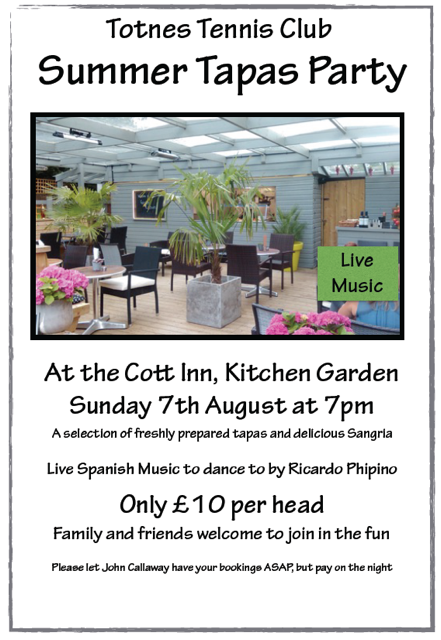 All TTC members. Don’t forget to sign up for the TAPAS summer party at the Cott Inn.
Please email John Callaway ([email protected]) with your bookings but you pay at The Cott on the night

Totnes Club and Harberton Cricket Club played out a competitive friendly 20/20 cricket match at the HCC home ground on a perfect summer evening with a stunning moorland backdrop. TTC got off to a very good start and all of the first five batsmen scored well, in particular Josh Orrell and Jeff Cornish. Batting sensibly well down the order, TTC scored a very creditable 113 from their 20 overs. In reply HCC really struggled at first against very accurate TTC bowling and at one stage were 5 for 3 with Jos Woolford showing great agility to bowl and catch the wicket of Alex Lintott. However, Heath steadied the innings and then the experienced Shepherd and Tobias shared a match-winning partnership. Accelerating at just the right time they got HCC home in the final over. It was a very close and a very enjoyable game. TTC must be congratulated for their skilful and sporting contribution to a great game of cricket and made the switch from racket to bat look effortless.

Tonia is offering a subsidised coaching course exclusively for Totnes Tennis Club members. The five week course will be available for a reduced fee of £25 and takes place on Tuesday evenings 6.30- 7.30pm. Dates to be confirmed.

Coaching will be in a small group and focus on both technical and tactical aspects of doubles play appropriate to all levels of experience.
Numbers are restricted to 8 as a result of limited court availability. If interest is high amongst members then further coaching opportunities will be made available.